FACT: No Counteparty transactions in that block.

I can only speculate, but I guess Symbiont uses a fork of Counterparty for testing smart securities (SS). Adam K. recently commented that security audits are needed (edit - see exact quote below) before SS will be launched on mainnet.

The Counterparty ecosystem is quite big all ready. This is a big plus since the network effect gravitates even more users to CP. The downside is that changing the source code becomes increasingly difficult as CP grows. Introducing SS is a very big step, hence it makes sense they use a separate fork for now.

Once SS are on mainnet they can import the contracts from the fork.

What do YOU think?

“We’d like to give a quick update where things are at regarding offering the full Ethereum smart contracts functionality on Counterparty mainnet:

Currently we’re in a bit of a holding pattern in finishing up the implementation, due to the fact that Ethereum itself is still under heavy testing and development, and its consensus system is still rather centralized. On top of this, the Ethereum Virtual Machine (EVM), which provides the execution environment for the smart contracts, is not ready for prime-time from both a security and maturity of features standpoint. Before we add the EVM into Counterparty mainnet, we’d like to see much more security testing around it, as putting an insecure and still-rapidly-evolving EVM implementation live into mainnet would have severe consequences to the existing Counterparty ecosystem.

Once Ethereum’s own implementations are more mature, stable and tested (with at least a few formal security audits behind it), we will be able to complete the Counterparty implementation. At that point, porting it over to Counterparty should be very straightforward.”

The article left out the important point that it not proof of existence or even a token system, but a complete smart contracts (‘smart securities’) platform. If it were anything else, there’d be no automatic dividend payments, conversions, cap table management, etc.

FACT: No Counteparty transactions in that block.

I haven’t tried to check that, but if true that is a great find.
Inquiring minds want to know

I think on Reddit there was a question (perhaps because of that) whether Symbiont will use Counterparty.

I would be great to see some confirmation that XCP will be central to all these smart contracts and the detail quoted above goes a way towards that… obviously actions speak louder than words and smart investors will act on facts not speculation; hopes and dreams. Clear commitment from Symbiont and/or having sight of those same smart contracts using XCP, will be the biggest news to date.

Symbiont offered a live demonstration of its smart-contract trading platform

Photo from this article.

If you look closely (zoom) you’ll see that you can select contract type + a lot of options. In green text there’s a block number. Is it 368396? I’m not able to tell but all looks very Counterparty’ish to me.

Looking forward to seeing something concrete and more than “There are no matching entries” on the blockscan: https://blockscan.com/tx?block=368396

Can we get anything directly from Symbiont to confirm how they actioned that first contract??

I don’t know if we’re expecting to see more contracts actioned over the next weeks or again waiting a while for more of the same.

JP, I think your explanation is pretty likely. Someone suggested to me that they may be using a different prefix for their transactions, perhaps that’s it?

Damn, @JPJA, you’re going to win the title of the best investigative reporter of the month!

Looks at the right (console) screen. I think next to red letters that looks like EXECUTE, which means it could be Smart Contracts of some sort (I don’t remember EXECUTE from any CP logs I’ve seen, although that could be application log (something like Counterwallet Enterprise Edition).)

I’m also wondering - with all those added options - if more bytes of OP_RETURN are being used and whether that too would necessitate a change in the protocol.

Is Symbiont giving nothing away about their actioning of that first contract? I was expecting there would be more know about this. For all our willing that Symbiont does use XCP, I wonder that hasn’t been confirmed.

Could we get an interview done with Symbiont to celebrate this and let them wax lyrical about what their plans and timeline is now?

There was another photo from the other side but I can’t see anything more from that. 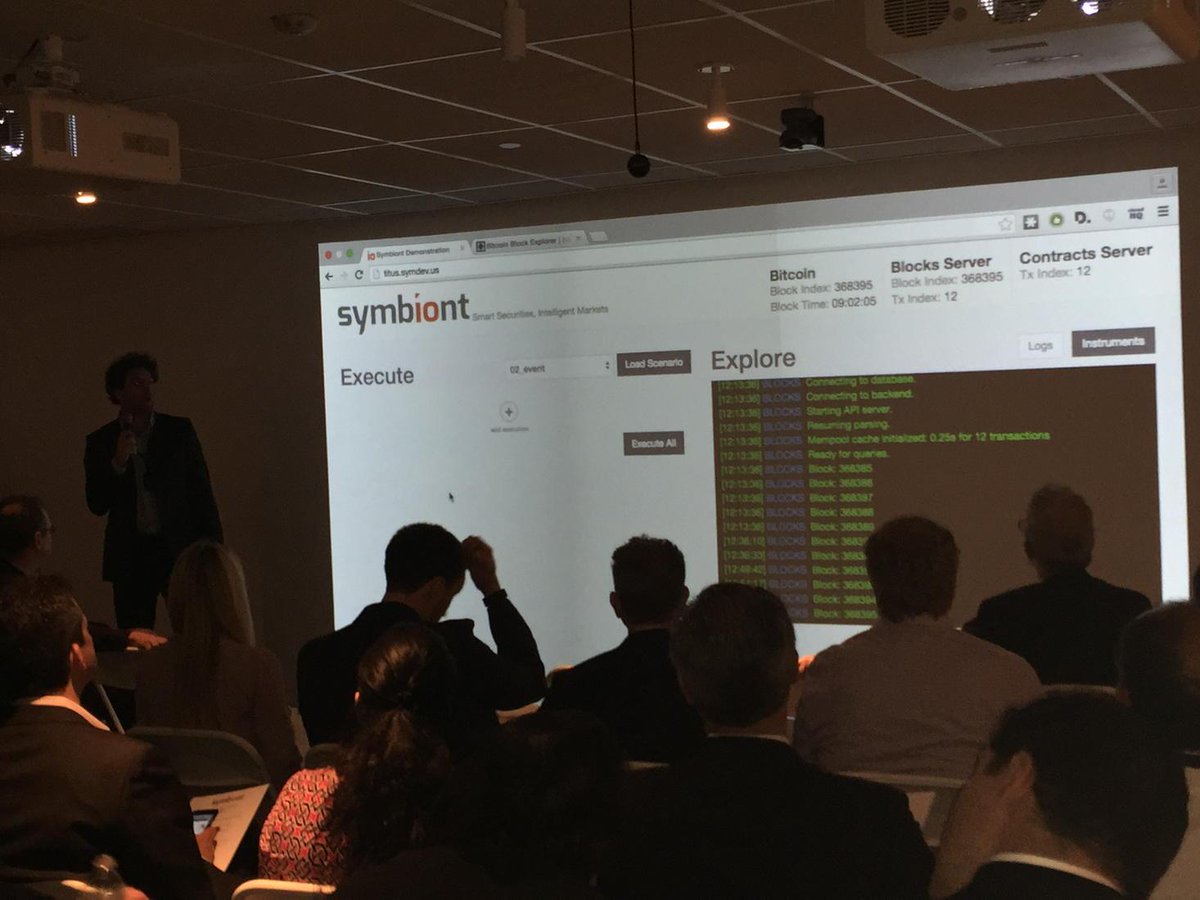 I have actually just asked them for an interview and they are not ready yet, but i will inform you as soon as i get one

What I see new on that screenshot is “Contracts Server”.

My question would be is that a private Counterparty Server with its own genesis block on top of CP or something else (what)? It could be the good ole CP server with Smart Contracts functionality.

This official statement clarifies everything:
http://counterparty.io/news/symbiont-and-counterparty/

[…]
As several realities became abundantly clear to us on both the regulatory and technical fronts, we developed technology based on Counterparty, but which differs from Counterparty itself in a number of key ways, being optimized a private network with known participants. This technology (layered on the Bitcoin blockchain) was at the root of the demonstration we provided.
[…]
Counterparty is a core part of the Symbiont “tech stack”, with entirely complementary technology to the other systems we are developing. In cases where public network on public blockchain (Bitcoin) solutions are most appropriate, Counterparty is the prime tool in our toolbelt.

Effectively, nothing has changed with respect to our enthusiasm for the potential of Counterparty, and permissioned ledgers will augment Symbiont’s platform offerings, not compete with the many market uses for Counterparty. We will continue to support the Counterparty ecosystem by providing development resources[,]