I’ve been trying to transfer some SJCX funds stored on paper wallet to an exchange, so I need to get them into a digital counterparty wallet in order to send them. I have the raw private key only, not the 12 phrase version. So I cant just log straight into the account and send it out.

I create a wallet on counterwallet.io, to sweep it in…but it won’t import because there’s not enough BTC in the address. So I send enough BTC, try the import again 20 minutes later…a few seconds later it tells me the SJCX transfer failed. Public address is of the sending wallet is 1NtbrPmNhjPwGqBbbxTCTK3KciiVALjsjz. And now when I try to import from the private address, the BTC doesnt come up in the box and it asks for more.

So at this point I obviously can’t trust that counterwallet.io is working, and I’m not going to risk any more SJCX or BTC interacting with it. I try indiesquare - no way to import a “real” private key. Same with freewallet and tokenly pockets.

So with only a private key, am I basically SOL trying to move around counterparty-based funds unless I download Armory and hundreds of gigabytes of the bitcoin blockchain? Hopefully there’s at least a way to convert a real private key into the 12 word phrase that counterwallet will accept.

You should be able to create a new wallet and sweep the funds into the new wallet using the private key… The whole not enough BTC issue is probably related to the high TX fees and the goofy fee calculations that bitcoin has been coming up with the past few days.

I should be able to do that, but every time I try about $1 worth of BTC disappears into the ether and the SJCX transfer fails. So no way I’m going to try and sweep a significant amount of SJCX through a system that’s so fragile, this isn’t just an annoying bug, it’s a digital currency transfer. That needs to be rock solid and this kind of unreliability is unacceptable if XCP and everything connected to it is going to go anywhere.

The funds are still connected to the private key. Is there really no way to login to any counterparty-compatible wallet with a private key? I get that the brain wallet is supposed to make things easier for people, but this seems like such an oversight.

your BTC is not disappearing if your transaction is not being mined.

Counterparty IS rock solid… your issue is not with counterparty, but with the fee calculation in counterwallet.

Looking at your address, I see a pending outbound transaction… perhaps wait until that transaction is mined

It’s been over a day, how much longer could it possibly take?

Transactions stay in the memory pool for about a week.

Think of the Bitcoin blockchain like a train, it can only carry so many passengers before it is full.

Hello, I might be late but I have the same problem with SJCX and BTC transfer, would you mind if you can check what went wrong with mine?

I lost a lot of BTCs during these transactions, I want to know if the reason was the high tx fees or was it my fault of not knowing how use BTC pay thus canceling my order but forfeiting my fee

It appears that you had order matches which expired because you did not do the btcpay transaction in time.

You might want to try using freewallet.io desktop wallet which has built in auto-BTCpay so that you don’t have to do anything other than leave your wallet open/running and when an order for BTC matches, it will be automatically paid.

Just to clarify, why I did lost the btc in the process?

You did not “lose” btc in the process.

You spent BTC on the transaction to list the order on the DEX (transaction fee).

Hello Mr.Support why cant i send my bitcoin into another address . Can you pls explain it to me well because i need my btc to do something important . 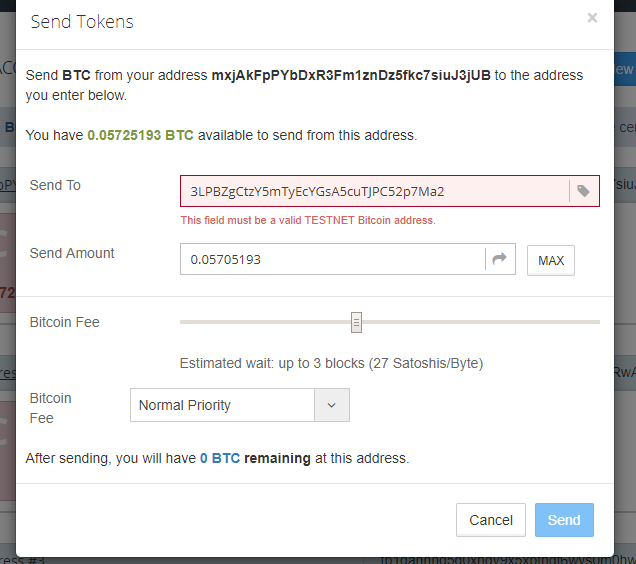 Sorry for the late reply, I haven’t received back any BTC after those transactions, so does that mean the transaction fee equals to BTC I sent? If not, where is the BTC then.

It appears that your trying to send the entire amount of BTC to your new address, but your not taking into account that you have to pay a miners fee to the miners to mine your transaction.

Try sending yourself 0.57 BTC and use the rest as a miners fee so that the transaction is processed

I’m still trying to figure out what happened. If there’s still BTC to get or retrieved that would be cool. If not, at least I know what I did wrong.

Hello, I hope you can clarify if I did spend all those btc in tx fees.