CounterParty server database is behind backend

my CounterParty server stops working and all RPC calls returning error -3200: “Counterparty database is behind backend.”. The bitcoind log shows it’s syncing without isses with the Bitcoin network.

Is it normal for CounterParty server to get stuck for over 20 mins?

EDIT: After restarting the server it catched up with the blocks but now it is stuck again (after mempool cache is initialized)… Last messages:

EDIT2: Apparently, it parsed the following block much later…

See a graph of recent number transactions (eg here: I sent BTC/XCP/TOKEN a while ago, but the transaction hasn’t gone through - why?), that’s why.

In recent months this happens frequently because there are so many transactions. It’s recommended to put Blockchain indexes ( if your filesystem allows you to do that; if not then the entire blockchain) and Counterparty DB on SSD). That makes these problems less frequent.

A bit more context, as I’ve been doing some performance characterization and optimization in spare time…

Notes (these numbers correspond to markings on the screenshot): 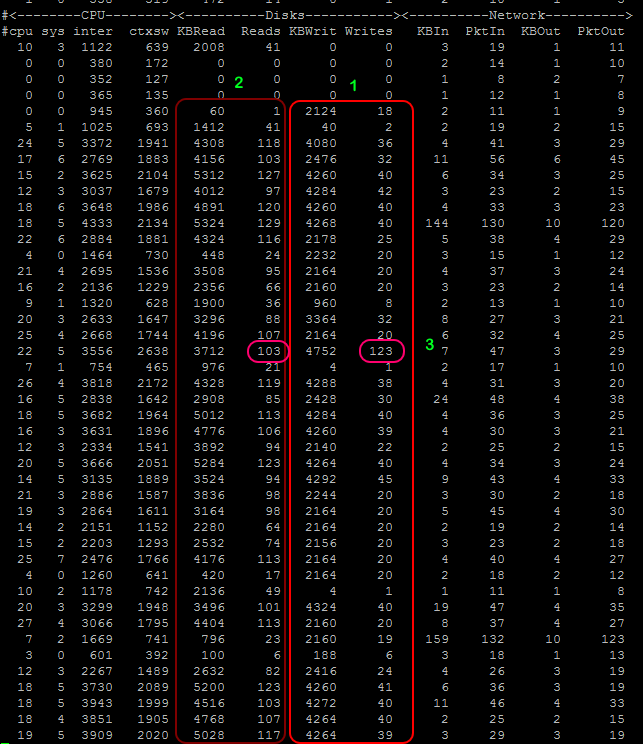 Note that Counterparty Server runs on a different system, which makes performance troubleshooting easier. Its performance in this case isn’t an issue (although it too would benefit from SSD) so I’ll just show another screenshot from Bitcoin Server when times are good (i.e. no timeouts on RPC client):

I also looked into the internals of Bitcoin Core and Counterparty Server performance in terms of I/O and while I haven’t processed most of data I collected, I seems to me that LevelDB (txindex, specifically) is what causes a lot of IO on Bitcoin Core, and haven’t found a way to make it run faster. Apart from the obvious, of course, which is to increase dbcache to a higher value if you have more RAM.

Realistically, though, you need SSD for Bitcoin Core and if you have more than 4 GB of RAM then you can put Counterparty Server on the same system. Below that and/or without SSD, it’s tough.

With SSD you can go to few thousand IOPS and not only avoid timeouts, but also recover from them (if they happen) without Counterparty Server timing out 12 times and then quitting (stopping).
When the blockchain gets 2-3 new blocks within 15 mins, or a 2-3 block reorganization (similar effect, essentially) a lot of churning has to be done, and a single HDD can’t handle that in a timely manner and still respond to RPC requests by Counterparty Server.

At time of attack you can’t do much even with faster h/w. But at least have this in bitcoin.conf:

In Bitcoin Core 0.12 (you can get a release candidate with addrindex from BTCDrak’s repo now - I’ve been running it for a few days, it seems good enough for test/dev) this will be handled better, and these settings won’t be necessary - see Reducing bitcoind memory usage · GitHub.

Thank you very much for your detailed answer.

Today I’m not experiencing this error anymore, so probably yesterday I had other processes in background stealing CPU/IO resources or the Bitcoin spam attack has slowed down now.
I have just added rpc-batch-size = 150 on my server.conf. I already had configured Bitcoin core with:

Anyway, looks like I underestimated the resources (I/O and CPU) needed to run several crypto wallets on the same server…

Today the TX situation is even worse - a new record it seems, over 257,000 transactions: https://blockchain.info/charts/n-transactions

If this is a test server where you can experiment, check out 0.12, it seems more responsive to me. You can install the both (i.e. get the binaries and put them in a different path) and run either 0.11.2 or 0.12rc* on the same blockchain (not at the same time, of course).

Those who run full node can check out BTCDrak’s own RC of Bitcoin Core 0.12 with addrindex (which is required for Counterparty Server). https://github.com/btcdrak/bitcoin/releases I tested Win32 and it seems to run much faster than v0.11.2. Having said that, there are also some 0.12 bugs (see Bitcoin Core issues on Github). But because there’s nothing to install (if you use BTCDrak’s prebuild binaries), it’s easy to test without uninstalling existing Bitcoin Core (0.11, for example) - you can…