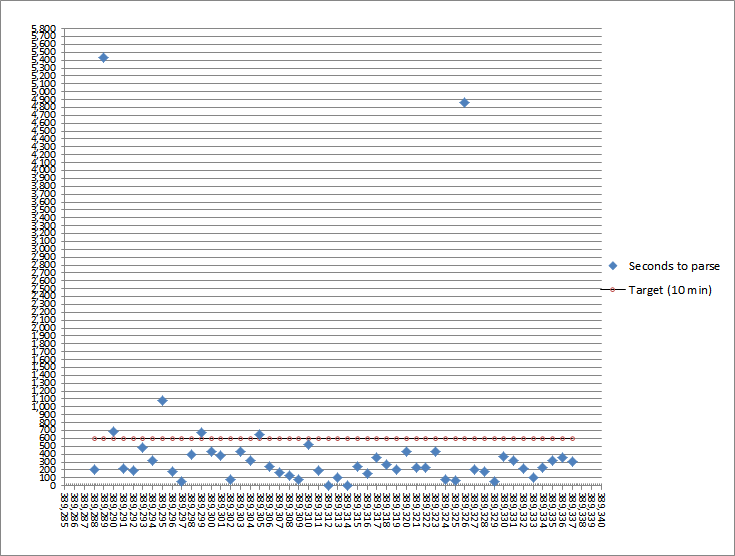 There’s no other workload (such as bitcoin CLI and counterparty client).

For some reason every now and then there are huge outliers that I haven’t been to figure out.
For example block https://blockchain.info/block-height/389326 took more than 4,800 seconds and had 1,692 bitcoin transactions and only 2 Counterparty transactions, so it would seem that the slowness comes from Bitcoin Core. 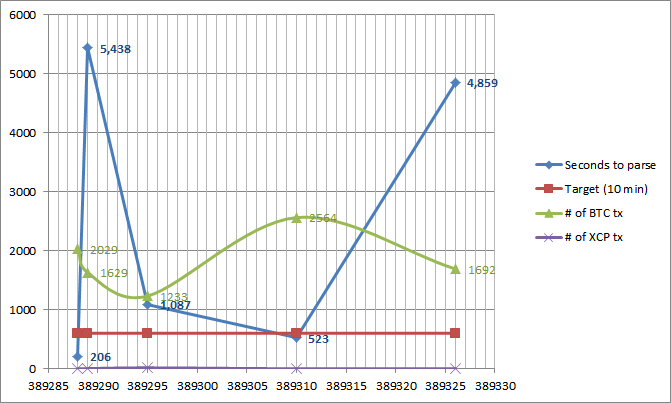 The green line is smoothed to see if there’s a delay between peaks of BTC transactions that could potentially be attributed to addrindex, but this data series is too short (I looked only at the current server.log).

With this I have only two suspicions:

It is important to add that because of this outliers, Counterparty Server is behind the blockchain most of time, so although the chart doesn’t look too bad, it is bad. SSD seems a must-have to run the both services on one Pi.

I am using the recommended settings (including the one you mentioned) and I do see a lot of rejected garbage transactions in logs, so that’s not entering the blockchain DB.

IO wait times are really where the problem is and they come from Bitcoin Core. But it’s hard to tell:

Workload characterization is a time consuming process and someone who understands cpp and Python better would be able to do this faster, but even a developer would take some time (otherwise someone would have done it already).

One thing that I’m not using, by the way, is the high number of RPC threads in bitcoin.conf because I discovered that there’s no difference in my case (Pi 2 can barely move, let alone drive 1,000 RPC threads).

To tinker with these counterparty-lib (maybe lower or higher value?) settings and related Bitcoin Core settings may be interesting, but when it takes several hours (!) for counterparty-server to start, it’s easy to blow a day on just this:

For the first parameter I’d like to test a value that’s the same as the RPC threads value in bitcoin.conf (4, by default), but I’m still waiting for counterparty-server to start processing blocks (it crashed due to the “transaction not in tx cache” error and I started it before I went to sleep).