Always have an active bet that users can play against and with settlement every few hours.

This is achieved by adding an automated contract addresses…

Lotteries will always be available and not require another human to play against, nor a trusted human oracle.

This will solve the chicken-egg problem where no infrastructure, and no usage, has deterred a Counterparty betting ecosystem from developing.

In addition, this proposal will lead to increased demand for XCP from players, and the automated player will accumulate XCP over time, effectively burning it.

The automated player will always bet on the side that gives the lowest payout (and highest probability of winning) in return for a slight edge. This is similar to how the house operates in a casino.

Therefore there will always be an active lottery on Counterparty. A human player only needs to make one bet transaction to participate. Once it confirms it matches instantly, then it takes up to a few hours before the oracle decides the outcome and the protocol pays out winnings.

Economically this will work since many humans, when faced with a potentially high payout, willingly accept a negative expected return. The automated player, on the other hand, will over time accumulate more and more XCP, allowing for larger bets.

The fee will be 0.05% and the time value will be set to the block height (not the block’s timestamp).

The automated player will operate from the same address.
Every 24 blocks the player will place a ‘not equal’ bet on the next broadcast. It will rotate between the values
4, 8, 16, 32, 64, 128, and 1024. It will always wager half its balance but require a counterwager
that gives the human player a 99% expected payout after the fee.

For every block, prior to parsing transactions, calculate a = block_height MOD 24

The constant ones are source = 1CounterbetXXXXXXXXXXXXXXXXXWhGbTM, fee_fraction = 0.0005 and text = 'Random'.

The timestamp will be set to the current block_height and the value will be generated as follows:

The broadcast will be added to the DB as the first transaction of the current block.

The bet will be added to the DB as the first transaction of the current block.

The Block Withholding Attack should NOT be a concern. Here's why. The Attack A miner who finds a valid block can choose not to broadcast it. Say Alice is a miner and the block she just generated settles a dice roll. She wins if the coin lands on heads (H) but her newly discovered block landed on tails (T). She can broadcast this block, but then she'll lose the coin flip. To have a chance of still winning the coin flip, she therefore better NOT broadcast the block. The Probabilities A fai…

I recently suggested an automated oracle for fair, open lotteries on Counterparty. I just realized it is also possible to have an automated player participate in these lotteries. It makes sense economically, and technically it shouldn't be too complex either. The Economics Every Counterparty lottery (or bet, same thing) needs wager and counterwager. E.g. if two people play on a dice roll, one player may wage 10 XCP on the outcome equal 6. The opposing player puts a counterwager of 47 XCP…

Not in this CIP but would be nice …

Magic Numbers Should be Debated

Initially someone needs to transfer some XCP to the bot address - 1CounterbetXXXXXXXXXXXXXXXXXWhGbTM.

I can do this myself. I’ll transfer a few XCP and start playing. Since it has a small edge, it will accumulate XCP over time.

The bot always takes the side with a large wager relative to the counterwager. E.g. on the 1028x bet, if it wagers 100 XCP, the human on the other side only needs to bet roughly 0.1 XCP.

This will, in the beginning before the bot accumulates more XCP, lead to a shortage of XCP at play. Humans at the other side may be left with unmatched bets that expire.

However, humans can also bet on the same side as the bot; even offer slightly better odds. This is a good thing, as the bot’s role is just to stimulate / kickstart a market. The more humans who play, the more infrastructure that will be deployed.

This is creative and I think it would be used.

I believe it would eventually become profitable for a miner to perform a withholding attack. If the value of the XCP grows somewhere over $100,000 ($200,000?), then I think a miner might start withholding to win a big (1/2) bet. I don’t like the idea that we could be interfering with normal bitcoin blockchain mechanics.

I guess it comes down to whether we want to enhance the protocol in this way. Is this a core feature that we want?

I think it would be interesting to also have an oracle on each block, as there could exist services in the future that could benefit of the added randomness(thinking of randomized contracts).

However, the automated player i don’t quite grasp how it would work, would it need to get xcp deposited to its address to work?

Also, would it be able to bet on any other asset? how about non divisible assets?

@deweller I’ll analyze the economics of miner interference. As with this proposal, I made it more expensive for a miner to do this since the automated player has an edge. But I’ll come up with some maths asap.

If a miner finds a losing block, he better withhold it IF the expected XCP payout is more valuable than the BTC block reward.

If the miner has a very high chance of winning (like he risks 97 XCP to profit 3 XCP, i.e. “the house”) then it’s in his best interest to withhold if the XCP is just slightly more valuable than the BTC reward.

If the miner is on the other side of the bet (very low probability of winning) a withholding attack does not make sense. See table below.

Since withholding likely only will happen when the miner has a high probability of winning, and he will only withhold a losing block, a withhold will happen very rare. 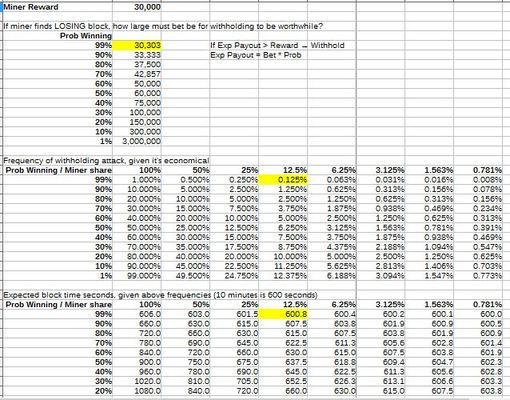 The CIP outlines an edge to the automated bet address. I see a potential problem and better solution now.

I thought of this as a good way to stimulate investment in infrastructure like bet explorers, wallet support etc.

However, if this attracts miners who are prone to manipulate the probabilities, and if this is the primary concern, a solution may be

Is there any reason not to make the automatic player place bets for all assets that it holds?

The more I think about this, the more I think it is a really intriguing project idea. But I also think this is a better fit for a smart contract than a core feature of counterparty.

Granted smart contract support might be a loooong ways away…

Is there any reason not to make the automatic player place bets for all assets that it holds?

Only XCP is supported.

If we add support for assets, how will indivisible assets behave? I guess we can test this by betting with a few XCP-satoshis?

Another thing - only equal/not-equal bets are enabled. There used to be a larger-than/not-larger-than type for CFDs but it was disabled due to a payout bug. Re-enabling this but with winner takes all can add support for lotteries with any probability. The oracle can then broadcast a uniform random value between 0 and 1.

I did some more (and better, I think) calculations on withholding attack profitability.

The conclusion doesn’t change, so I won’t spam more here, but feel free to study and verify the numbers in another thread.

If we add support for assets, how will indivisible assets behave? I guess we can test this by betting with a few XCP-satoshis?

How do bets with indivisible assets behave now? Are they even supported in Counterparty bets? If not, then the player will just ignore them. If they are supported, then there will probably be a minimum amount (100?) specified by the protocol in order to take a 3% fee.

No. Just wager asset A in order to win asset A. Exchange rates would be way too complicated.

I don’t think any assets are supported. Only XCP.

Assets are definitely not supported. Only XCP can be used for betting.

On the bright side - if we do implement this, I think there won’t be a problem with indivisible assets. And one asset against another shouldn’t add much complexity either.

Then Bob comes along and wager 30 with counterwager 10 on NOT equal 4 but other parameters are the same.

The protocol matches these two bets, i.e. escrows the amounts, and pays out to the winner after the Oracle’s first broadcast after the deadline. The winner is determined by the broadcast value.

It’s implied that they use XCP for betting.

It shouldn’t be too difficult to add for support any asset, right? And once we’re at that, we can just as well let them specify asset A for wager and asset B for counterwager. If Alice wagers 10 XCP and requires 30 PEPE counterwager, then it will match with Bob’s wager of 30 PEPE against 10 XCP.

The protocol will thus escrow 10 XCP from Alice’s address and 30 PEPE from Bob’s. The winner receives 10 XCP and 30 PEPE.

Is this something I should add to this CIP or should I keep the current proposal to auto oracle+bet address only?

IMHO, better to have them on separate cips

Here’s justification for my choices

This CIP has been merged in deferred status.

While this proposal is technically well thought out, it carries some liability. The core maintainers do not want to implement this feature at this time.